I am sure that this comes as no surprise to most of you introverts reading this, but to my extrovert leaning friends reading this, surprise!  When most people think of introverts, they think of the quiet person at the meetings or that one friend who does not like to be in big social situations.  While these stereotypes are often indicators of people who identify as introverts, sometimes we can fool you.

Introverts are often talkative and will be the ones leading meetings and discussions.  Introverts can often be fooled by this behavior too!  In fact, a friend, after reading this blog, reached out to me telling me they were introverted, and I would have never guessed this when I first met them a couple of years ago.  I can list the names of great leaders and orators who identified as introverts that I found from a quick Google search, but I would rather tell of my interesting twist on this stereotype.

For those of you who know me, you know that soccer is a part of my life as much as food and water are.  I have been playing since I was 3, and it is my number one way to recharge after a long day.  Whether it is playing FIFA, watching Premier League games early on Saturday mornings (Come on you Swans!), or simply just taking shots on an open net, I have known for a long time that it is my way to rebalance myself.  It was not until this past week that I realized another interesting dimension soccer played with my introversion.  Communication. 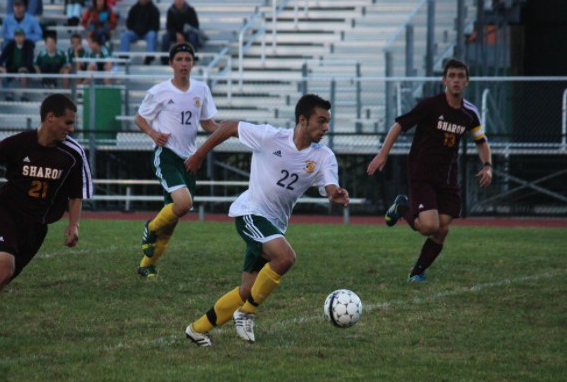 Yours truly playing for my high school sometime in 2014.

My friend and I recently checked out a new field close to my new apartment.  When we arrived, the entire field was being used by a group of high school players playing a full field scrimmage.  My friend and I kept to the sidelines passing the ball back and forth reflecting on our high school soccer stories and scouting the players on the field as if we were college coaches (a future ambition of mine!).

At halftime, my friend and I snatched our opportunity to take some shots on the net, which the resting teams had left vacant.  I noticed one of the players jogging over to us, and I figured the coach had sent him to boot us off.  When he approached us, he asked if we wanted to join in on their game.  It was like Christmas in July, my friend and I immediately accepted his offer and quickly put on our team pinnies, which smelt like they hadn’t been washed in weeks by the way.

My team was a handful of boys and girls in high schools all over DC, who were there for fun during the summer nights.  I quickly went around introducing myself to all players on my team making sure to get their names.  For those not as well versed with soccer, from a young age you are taught that communication is an important key to the game.  As I played in high school and for my club team, this communication became more and more important and could even decide the fate of some games.  Pick-up games are no different, in fact I think it’s more important.  You need to tell your teammates where to pass to you on the field, where the defense is, whether they should shoot, whether they shouldn’t shoot, etc.

Immediately I fell into this role.  Shouting “man on,” “play square,” “play heel,” “switch field,” “pass the damn ball Kamil!” Besides this normal soccer communication, I was also taking the time to learn more about my teammates and the other players on the other team.  Sometime between gasping for air after a 40-yard sprint and pulling my calf, a light went off in my head.  Here I was, an introvert, making conversation with complete strangers and communicating with them with ease.  No anxiety, no loss for words.  I found it fascinating.  Over my years of playing I had changed how I saw communicating on the field.  I remember as a kid being terrified of talking to my classmates on the soccer field when the coach asked.  I began thinking of the communication as a step to success rather than something to be feared.

I am also comfortable on the field.  All barriers that I put up in social situation are torn down as soon as I step onto the field.  The best way I can find to explain this comfortability is simply put; it is the feeling of talking to your family at home, or it is talking to your best friends in a small group setting.  In these areas, introverts are talkative and unreserved, words flow free.  If you can put your head into this environment the next time you give a presentation or the next time you attend a work happy hour, you may surprise a few extroverts with your communication and motivate introverts to speak up to!